Urban Woods Hat | Knitting Kit - is backordered and will ship as soon as it is back in stock.

This hat is the first of many to come by the new knitwear designer Patrick Knits!

This kit includes all the necessary yarn & a pom pom!

To knit the Urban Woods hat kit, you will need :

The pattern is offered as a PDF document. A link to download the pattern will be emailed to you ♥

First, the kit had plenty of yarn, and it's beautiful. Second, you're going to need sock needles to finish it. At least I did. Third, looking at the gauge and the stitch count, it seemed small to me (I don't like my hats to be all stretched out when I wear them), and at least one review suggested that it might be. So I looked at other patterns using similar yarn. Most had more stitches. I ended up adding 24 more (three repeats of the zig-zag stitch pattern), about half way between what this and other patterns call for. The result was a hat that's definitely not too snug and won't be even if washing it shrinks it a bit. That said, one or two additional repeats would likely be enough depending on how snug you want it. I will add at least one to the pattern if I make it again. I'll say again, the kit is great with plenty of lovely yarn that's a joy to knit with. Instructions are easy to follow. The top is a bit puckered; that might be resolved with blocking, but the pom pom covers it. Love the pom pom. I chose coyote. 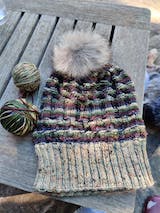 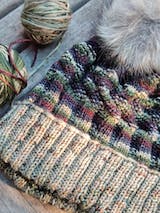 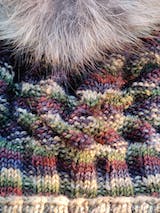 I love this yarn and the pattern. Easy to follow and fits perfectly!!!